A Typical Night at the Coffin Nail

It is the height of summer in Yem, and a fresh blanket of snow is being laid over the island. You approach The Coffin Nail, whose smoking chimney promises warmth and reasonably good food. At the corner of the building, several chained ghouls snarl as you approach. They bear The Dread Prince's brand, and are common enough a sight.

As you swing the door open, you hear a heated debate. A strange beardless dwarf is arguing with one of the regulars.

"I tell you, a lich is down there," the dwarf exclaims.

"There's no lich in that castle, maybe a ghoul," an old man replies.

"Let's ask the Ghoul Master," the dwarf says, "Avaric, could a ghoul survive down there?"

"Well, strictly speaking, no," the uniformed elf replies. "The biggest problem with ghouls is how dependent they are on a supply of fresh corpses. We use them as shock troops, but they are not very reliable. Start an assault, and they immediately run to the closest graveyard."

"Well, it ain't a lich, I can tell you that," replies the old man. "We should ask Archibald, he'd know."

From a corner you suddenly realize you never look into, a shimmering begins. The form of a once-corpulent, now quite dead man appears. His ancient robes hang moth-eaten over his shoulders. Tiny pin-pricks of light shine in his deep-set eye sockets. A voice from the depths of your worst nightmares begins to speak. Your skin crawls as Archibald begins...

"Nope, no lich in that castle," the lich begins, "I daresay I know every lich in Yem, and there was never one in that castle. I remember the days when that was a thriving way-station for traders headed north. Those were better days..."

"Aw, what does he know?" the dwarf exclaims. "What kind of lich hangs out in a bar all day, anyway?"

The black bolt of lightning strikes the dwarf before you realize what is happening. Everything goes black for a moment... When your vision returns, the bartender is sweeping up a pile of ash. You look desperately at the corner for an answer to your confusion, but see nothing but a table that has not been cleaned in months.

"Bartender," you say, "what happened to the man at that table?"

"Don't know what you're talking about friend," he replies, "finish your drink." He pours the ash from the dustpan into a large bottle, and sets it behind the bar.
Posted by Darius Whiteplume at 5:16 PM 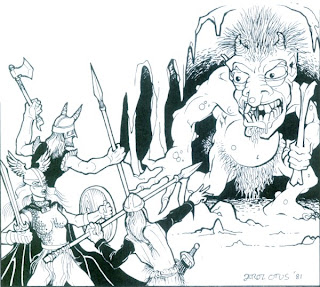 This is a fun, simple campaign blog for an online game of Basic/Expert D&D.

We play with a light touch, classic old-school lethality, and a penchant for hilarity. We talk about the campaign and the characters we make here but don't be surprised to see posts tangent off to a myriad of gaming musings. 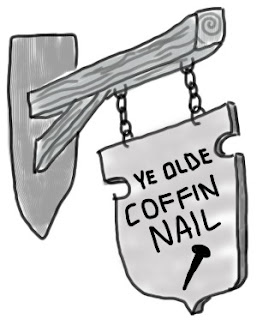 Clerics Get No Love